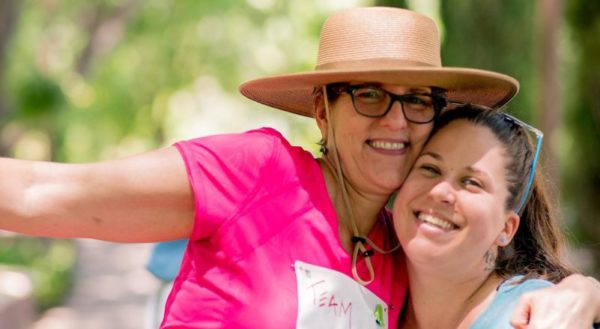 “Anne taught me how to be honest, how to communicate, and how to trust,” 26-year-old Megan said about her Mentor. “Now, I know that we will fight, but we’ll be okay in the end.”

Megan and Anne initially met in 2011 via NMCAN’s Mentoring Project, and now consider each other chosen family. They represent what NMCAN strives for in our programming. Together, they have established a healthy and strong relationship grounded in honesty and trust. Their story is six years in the making, and NMCAN spoke with them earlier this summer to learn about the evolution of their relationship and where they are today.

Learning About Trust and Honesty

Seeing them together, it is clear that they are close and have a genuine bond—turning to each other to fill in the blanks of a story, smiling as they recall happy memories, and being thoughtful as they reflect on past fights. Yet, despite their current connection, Megan remembers her directness when they first met, telling Anne that she did not want a mentor.

Anne agreed, “When I met Megan, she was in school. She was working full-time. She had a car. She was making her way through life very successfully. So as we talked, I said, ‘Rather than mentor, how about I be your aunt?’”

For Megan this made sense, “I initially thought ‘what are you going to help me with?’ But having an aunt made sense. That’s the one thing I didn’t have, is family.”

From there their relationship grew, learning about the process of trust and establishing boundaries with each other. Megan was challenged and comforted by her relationship with Anne. “I used to be afraid to tell people the full truth about things so they wouldn’t leave,” Megan shared. “But Anne taught me to be honest and was always there for me… I learned that Anne was going to respect what I’m okay with and not okay with. This was so important because not everyone has respected these boundaries before.”

Megan recently graduated from college and is in a big transition in her life, and Anne remains a constant friend to turn to. “My nature, and professional training, is not to judge and not to give advice,” Anne said who is a mediator by profession. “I will say, ‘I can see that this may be problematic, but the truth is you’re going to figure this out.’”

With this trust and honesty, Megan began to gain self-confidence and learn how to make more thoughtful decisions. She said, “Sometimes in the beginning I would say, ‘just tell me what to do. I hate making these decisions.’ But Anne offered a perspective that would help me make my own decision, which was empowering to me… When she kept doing that over and over again, it made me respect myself and my needs.”

“My advice to other volunteers is to listen very substantially,” Anne shared. “One time, Megan said, ‘you will not tell me what to do,’ with a little frustration in her voice.

“I replied, ‘because you a smarter about your life than I am.’”

Because of their current busy schedules, they have not been able to see each other as often as they would like. However this has had no impact on their relationship and where they are now. “It’s just so easy now,” Anne said. “She is my niece. We can go long periods of time not seeing each other because of how crazy our lives can get. But it’s just a missing her, not a worrying about her.

As they consider any advice for other Mentors and Mentees out there, honesty is a recurring value. Megan shared, “Honesty was not even something that I thought I had to work on, but Anne inspired that in me. Mentors need to model that with their Mentees because it builds self-confidence and self-empowerment.”

NMCAN is so honored to celebrate Megan and Anne. Congratulations on six incredible years together! We are so grateful to participate in this journey with you and wish you continued honesty, trust, and love in this inspiring relationship.

Are you a young person who wants to have a mentor in your life? Text “NMCAN” to 25827 to learn more.

Or are you a community member who is interested in supporting young people in their transition to adulthood? Contact Community Engagement Coordinator Elena Fletcher at 505-217-0220 ext. 1009 or elena.fletcher@nmcan.org to learn more or sign up for volunteer orientation.